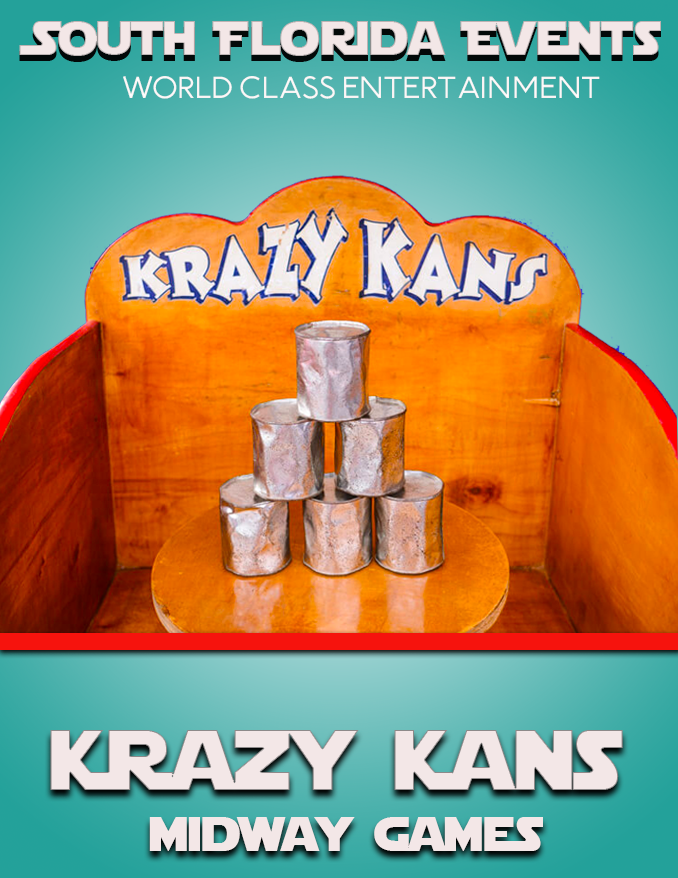 Bean toss games are a staple at and carnival or outdoor barbecue setting. They have been around for ages, and allow people to get together for some good old fashioned fun. It doesn’t matter if it is a game that is purchased and set up, or one made on the fly for some simple entertainment. Typically, bean bags are tossed into a hole, or at a particular object to accrue points and eventually win the game. Whether it is one in wins, or up to a certain number of points, it is a great way to pass the time.

Krazy Kans is our bean toss game with a spin. The goal is to knock down all five of the tin cans with three bean bags. This can get a little tough, so be sure to practice before you try to show up your friends! Getting them down doesn’t appear to be difficult, until you realize that you only have three shots to do it. If you miss one, your chances of knocking them all down drops drastically. If you miss two, you need a miracle! Sometimes you can do it, but it takes some real luck to complete the mission with less than three bean bags hitting the target.

After a few attempts, you should be able to get them all down if your speed and aim are on point. Then it is your turn so sit back and watch as others attempt it. Perhaps they will get it down quicker than you, or maybe they will be there for an hour instead! It all depends on how they throw and the patience that they have!

Create a fun, enjoyable atmosphere with a bit of nostalgia by adding Krazy Kans to your next event. Surely, your guests will have played a game like this before and it could bring back some fun memories for them, while making new ones at your party! Your guests will try their luck time after time each time they make their way around to the Krazy Kan game stand. This wooden delight is a fantastic addition to any outdoor event and will keep guests busy for hours as they build up a bit of competition to see who can get the cans down with the least amount of attempts. They could even just be challenging themselves! Either way, it is entertaining and enjoyable for players and spectators.