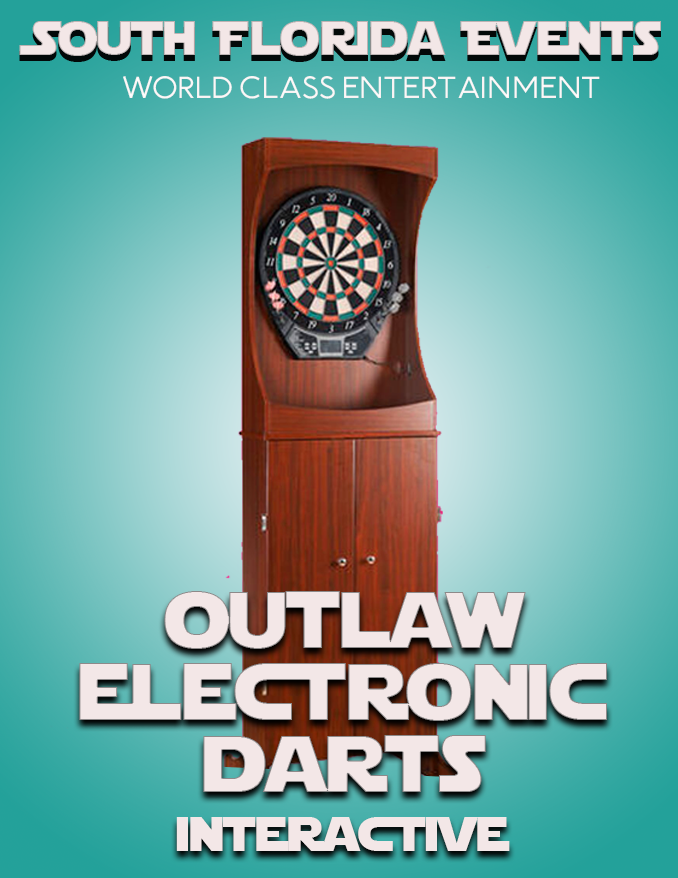 Outlaw, For years and years, darts have been a standing form of entertainment. From bars to basements, dartboards can be found and enjoyed anywhere. Friends play against each other to see who can get the bullseye first, and bar patrons play against each other to see who buys the next round! It truly is a friendly form of entertainment that almost anyone can play and enjoy.
The circular board is hung and portrays a target with different point areas. Aim and throw your darts wisely to get the closest to the middle of the board, and try to avoid the wall!
No matter what your theme is, darts will fit! Medieval themes, pub themes, or general get togethers will all benefit from a dartboard for entertainment. It will keep people busy while offering a bit of friendly competition between the players.

There are a variety of games that you can play on a dartboard- Around The Clock, Cricket, Knockout, and Standard 701, 501, 301, just to name a few. All games have different difficulty to from novice to professional; there is always something to suit your skill!

Older dartboards were made of felt with sharper darts, which made the game a bit harder and more difficult to keep track of scores and the actual game that you were playing. It also made for a lot of darts bouncing back at the thrower, or ending up stuck in the wall behind the board. While the game was still fun, it came with its cautions. This aspect of the game resulted in a clever update.

Our dartboard is an updated version with all of the electronic bells and whistles. This board is preprogrammed with a variety of games and has a plastic face with small holes. The holes are created at an angle, which makes the darts stick inside better. When a dart hits the board, the computer keeps track of the points that the player lands on. It will keep score for you, allowing you to enjoy the game rather than being scorekeeper. It also comes on its own backboard, so you don’t have to worry about darts hitting your walls.

This electronic dart board is a great way to entertain your guests while allowing them to get a little competitive amongst each other. Since there are so many games that can be played, your guests surely won’t be bored! A little friendly competition never hurt anyone.