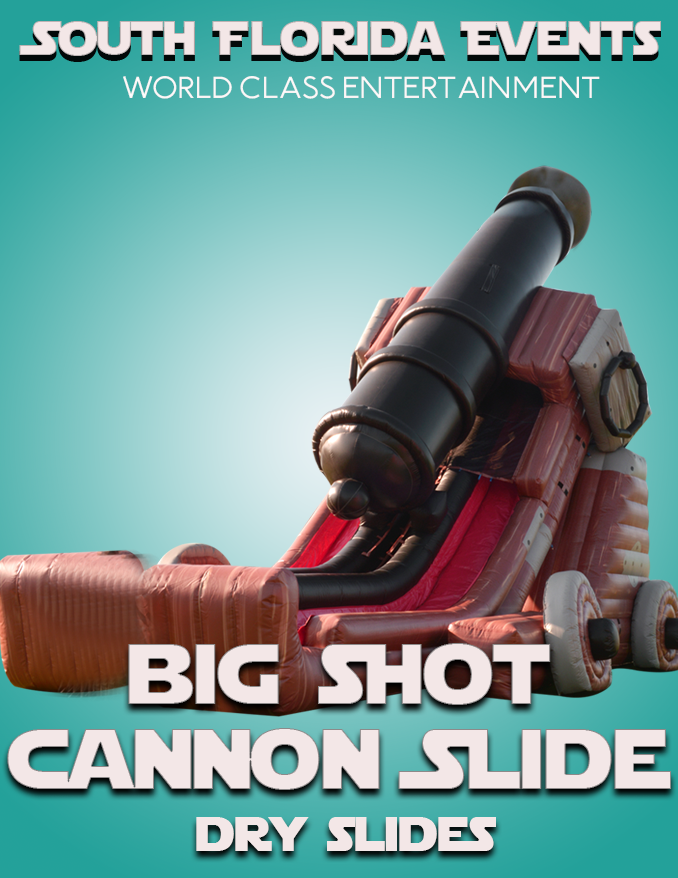 When you are at the fair, circus, or carnival it is almost always guaranteed that at some point you are expecting to see someone, or something, being shot out of a cannon. It makes your stomach a little queasy when you are anticipating it, but it doesn’t stop the excitement building up inside of you! It is both fun and scary to see someone being shot out of a cannon. Where will they end up? Will they get stuck? What if the trick doesn’t go as planned?

Our inflatable Big Shot Cannon will rouse up the same feelings inside of you, but you will be the one climbing to the top and sliding down the steep slide. Instead of you feeling for the person attempting the death-defying trick, people will be watching you! They will be crossing their fingers, hoping that you make the climb to the top on your first trip up. Then, they will be gritting their teeth as they anticipate your plunge down the slide.

Going to the circus is fun for the whole family. The smell of cotton candy, the view of the acrobats, and the animals that perform tricks are all fun to watch. No matter what interests you, the circus is bound to keep you entertained the whole time that you are there. Adults and children are delighted by various things during the event, and it is a great opportunity to go and get out of the house.

For adults, it is amazing to watch the performers test their skills by jumping from rope to rope and even walking on them without hesitation. You may even get a bit scared for them as they begin to perform tricks while so far up in the air! The animals performing the tricks are adorable, but there is always the fear that they could rebel against their trainer and let their true instincts show through. Even though they are trained, they still have their teeth!

As children, it is fun to see all aspects of the circus. They love seeing the animals do silly things, like jumping through hoops and riding bikes. They laugh when the acrobats walking the tight rope pretend like they are losing their balance, and for most, they are most entertained by the clown that gets shot out of the cannon!

They look in amazement as this performer loads him or herself into the cannon. They know isn’t right, or something that is normally done, but they can’t seem to take their eyes off of it. They may even trick you by tossing a flower or a balloon out first. But, then- they come shooting out of the cannon! Will they land right? Will the net be enough to catch them and keep them safe? Before you know it, the clown hits the net and jumps up without even getting a scratch!

Our Big Shot Cannon Slide will give children a sense that they are the performer in the circus. Climb all the way up to the top with just a hint of hesitation about the slide back down. They will do it again and again while pretending that they are the performer, although they will be landing on an inflatable, safe surface instead of a net. Let them put their imaginations to use as they attempt a ride on our Big Shot Cannon dry slide inflatable. (Wet slide available If preferred.)